A trip to the top of Aotearoa is an unforgettable experience. 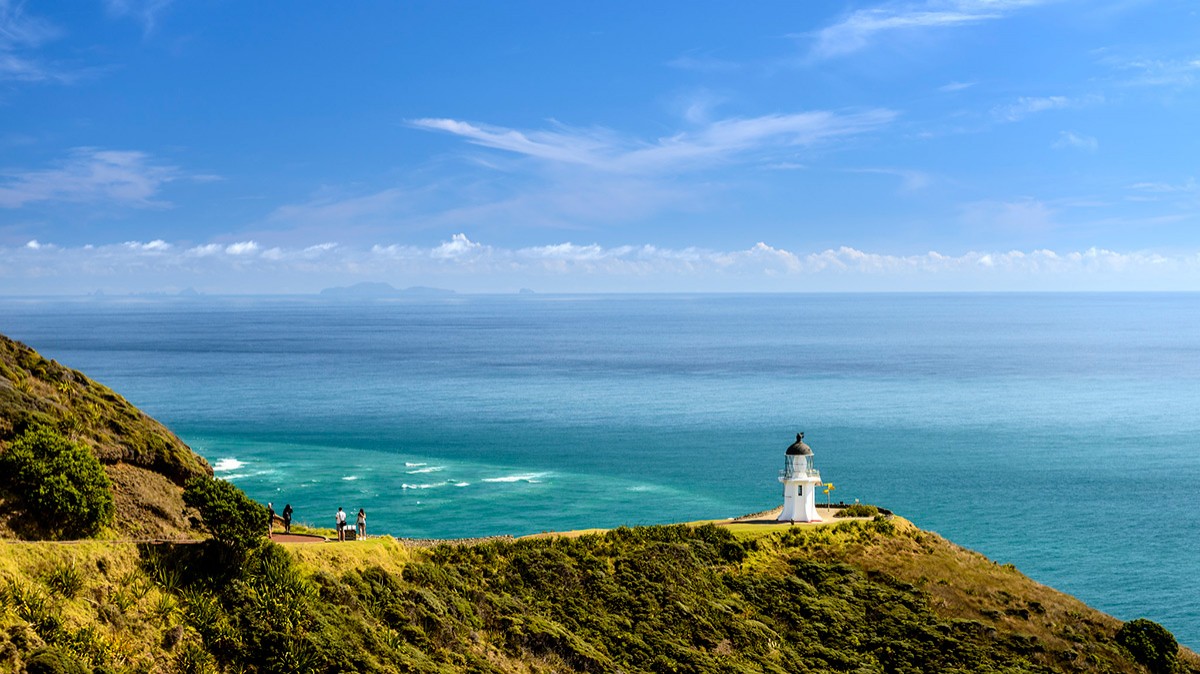 Where is Cape Reinga?

A few hours’ drive (or better still, a Fullers GreatSights coach trip) from Paihia is the northernmost tip of New Zealand, Cape Reinga. Here, the tumultuous Tasman Sea meets the mighty Pacific Ocean at the end of the Aupouri Peninsula.

Getting to Cape Reinga

It takes just under three hours to drive from Paihia to Cape Reinga. Along the way you'll pass through remote Far North towns and settlements. Once you reach the Aupouri Peninsula there are two route options: along State Highway 1, or you can also drive along Ninety Mile Beach, which is also a registered highway. However, driving on Ninety Mile Beach is best left to the experts as tides and shifting sands can make it dangerous.

Visiting Cape Reinga on a sightseeing day tour lets you relax and enjoy the scenery while an experienced local guide handles the driving. You'll travel along Ninety Mile Beach, stop to go sand-surfing at the enormous Te Paki sand dunes, and make other scenic stops along the way.

For Māori, Te Rerenga Wairua (Cape Reinga) is the most spiritually significant place in New Zealand. They believe the spirits of their recently passed loved ones depart from this point on their journey to the afterlife.

After travelling up the country, the spirits gather at Spirits Bay to the east before approaching the Cape. At its very tip is a gnarled pohutukawa tree, believed to be over 800 years old, which the spirits are said to climb down to reach the ocean. They then travel underwater to the Three Kings Islands, where they turn for a last farewell to New Zealand before continuing to the land of their ancestors, Hawaiiki-A-Nui.

The iconic lighthouse at Cape Reinga was first used in May 1941 and was the last manned lighthouse to be built in New Zealand. Since 1987 it’s been automated. Standing 10 metres high and 165 metres above sea level, the lighthouse is as majestic as the 360° views around it. It’s not open to the public, but it makes a great focal point for your photos.

What to do in Cape Reinga

The Cape is certainly an enchanting place. Set off down the track from the carpark and learn about the history, geology and ecology of the area on signposts as you travel. Make your way down to the lighthouse, enjoying views out to the horizon in all directions.

At the base of the lighthouse is a signpost showing the distance from the Cape to locations all over the world – one of many excellent photo opportunities on your journey to this isolated and unbelievably beautiful spot.

Just slightly to the west of the lookout you’ll see the powerful swell and crash of the waves as two ocean currents meet head-on. You can also see the pohutukawa tree of the spirits, clinging to the rocks far down below. Whether you believe in the Cape’s spiritual significance or not, the atmosphere here is undeniably special.

Where to stay at Cape Reinga

If you're making your own way to and from Cape Reinga, there are some DOC campgrounds near Cape Reinga. One is at Tapotupotu Bay (only 5 minutes' drive away, or a three-hour hike). The other is further to the east at Kapowairua (Spirits Bay). Otherwise, the nearest towns to Cape Reinga include Te Kao, Houhora, Kaitaia, and Ahipara.