Explore the historic 'fruit bowl of the north' and sample local treats. 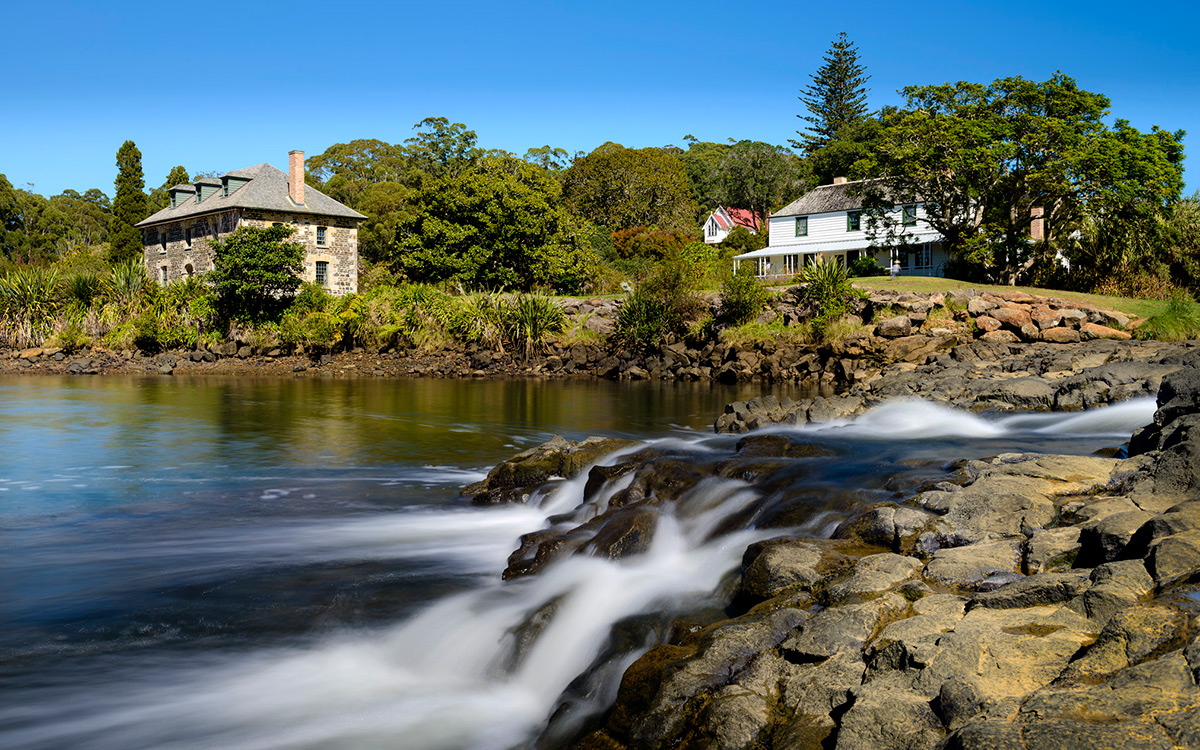 The leafy town of Kerikeri sits on an inlet at the northwestern end of the Bay of Islands, about a 20-minute drive from Paihia. Kerikeri is renowned for its warm temperate climate, fertile soil and creative residents. Known as the ‘fruit bowl of the north’, here you’ll find abundant fresh local foods, cafes, vineyards, galleries, gardens, arts and crafts.

While the exact origin of Kerikeri’s name has never been established, it has given rise to the town’s unofficial slogan – ‘So nice they named it twice!’

On 23 December 1814, Reverend Samuel Marsden’s ship arrived in the Bay of Islands and anchored at Oihi Bay in Rangihoua, just outside the Kerikeri Inlet. Here on Christmas Day, Marsden held New Zealand’s first Christian church service. Marsden Cross on the shore commemorates the event. Marsden set up a mission station at Rangihoua before returning to Australia. He came back in 1819 to found a second mission in the Kerikeri Basin.

At the time Kerikeri was home to the formidable Ngapuhi chieftain Hongi Hika. He and his warriors terrorised tribes throughout the North Island, but he welcomed the early missionaries, allowing them to settle on land overlooked by Kororipo Pa, his tribe’s village. This may have been a purely tactical move, as he hoped the relationship would allow him to obtain muskets and other weapons.

Marsden’s early missionaries built the Stone Store and the Mission House (Kemp House) in the Kerikeri Basin, which are now New Zealand’s oldest standing European buildings. For a time the mission flourished, but eventually Hongi Hika and his tribe abandoned the Pa and moved on. As a result the mission was eventually closed, and over the years the Stone Store was used for all manner of purposes – as a trading post, library, barracks, school and general store.

Did you know? You can explore the restored Mission House and the Mission’s Stone Store on the Kerikeri afternoon tour.

Koriripo Pa is now a historic reserve managed by the Department of Conservation. It’s a lovely place to visit and learn about its history. The Pa is an easy walk from the Basin and has great views.

As well as introducing Christianity to Kerikeri and the nation, Reverend Marsden is also widely credited with planting the first grapevines in New Zealand. From his journal:

"We had a small spot of land cleared and broken up, in which I planted about a hundred grape vines of different kinds brought from Port Jackson. New Zealand promises to be very favourable to the vine, as far as I can judge at the present of the nature of the soil and climate. Should the vine succeed it will prove of vast importance in this part of the globe."

Today, wine still features as one of Kerikeri's primary industries. From the 1920s onwards farmers started planting market gardens and orchards in its fertile soil. The region is now known for its citrus, kiwifruit, tamarillos, macadamia nuts and a variety of vegetables and flowers.

In Kerikeri you’ll also find the oldest fruit tree in New Zealand. A pear tree planted by the early missionaries stands across the road from the Stone Store, and it still bears fruit today.

What to do in Kerikeri

Our Discover Kerikeri tour is one of the best ways to experience the town. This afternoon tour takes in the best things to do in Kerikeri, including the Mission Station, a vineyard tour and tasting, and a boutique chocolate factory.

If you have more time, exploring the region’s many vineyards and sampling local produce is a great way to spend a day, while fine dining options in Kerikeri include Wharepuke and The Pear Tree.

Kerikeri’s main village is a bustling area with designer clothing, original crafts and gift shops, home decor and gourmet food stores, as well as a farmer’s market on Sunday mornings.

Staff tip: The farmer's markets are really good for fresh produce. They have the best mussel fritters over there too - you can't possibly go to Kerikeri without getting a fritter! Debbie, Paihia sales

To gain an insight into early Māori life in Northland, walk to the historic site of Kororipo Pa and explore the archaeological features still visible, including terraces, pits and a defensive ditch and bank. Then pay a visit to Rewa’s Village, a recreation of a traditional Māori village constructed by the community.

There are several other walks and hikes on offer around Kerikeri. Rainbow Falls is a 27 metre-high waterfall on the Kerikeri River, surrounded by beautiful scenery and the habitat of wild kiwi. It can be reached via a 10-minute walk from the Falls carpark, or as part of the Kerikeri River Track, which will also take you past Wharepuke Falls and the Fairy Pools (a popular swimming spot) on a 90-minute walk. Find out more about Bay of Islands walks.

Where to stay in Kerikeri

Kerikeri is the largest town in Northland and has a well-developed town centre, so it's a great place to stay in the Bay of Islands with a wide variety of accommodation options.