This charming seaside village has a surprising past. 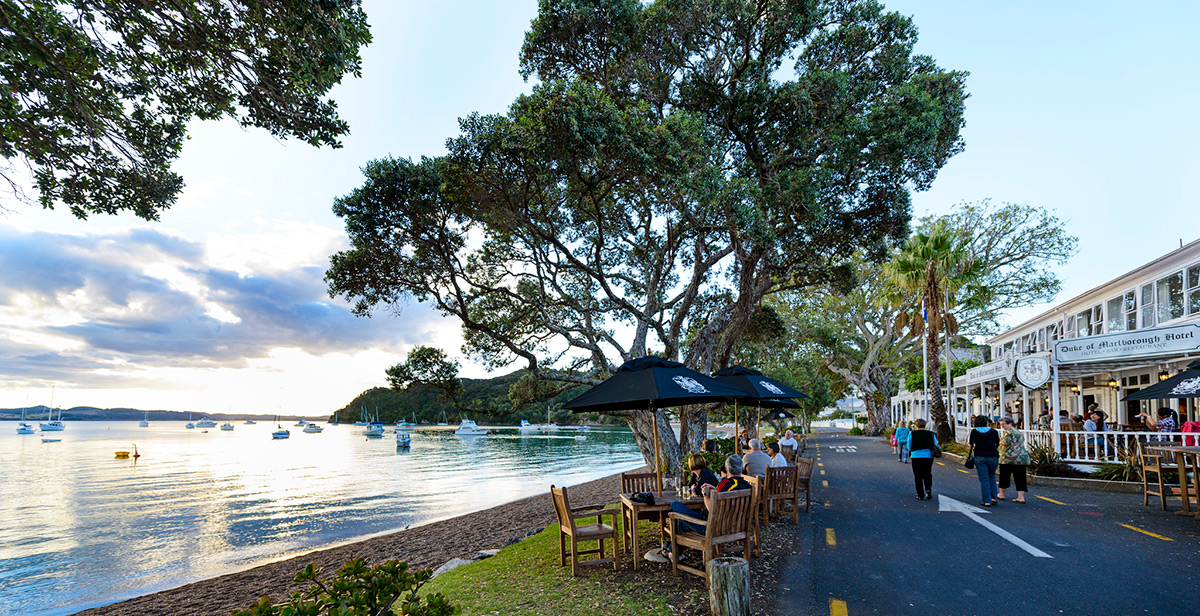 Russell is New Zealand’s oldest European settlement, and has a sleepy tranquillity that belies its tumultuous past. A picture-perfect seaside town, Russell is situated on a peninsula across the harbour from Paihia. It can be reached by passenger ferry, car ferry or by road.

Russell, or Kororāreka as it is also known, was an established Māori settlement long before Captain Cook arrived in 1769. It’s said to have gained its name when a wounded chief asked for some healing penguin soup. Upon tasting the broth, he said ‘Ka reka ko kororā’, meaning ‘how sweet is the penguin’.

In the early 1800s, European and American ships began visiting Russell and trading with the local iwi (tribes). Russell offered a safe anchorage, so it quickly became a popular port of call for sailors, whalers and traders – as well as deserting seamen, runaway convicts, grog sellers and prostitutes. In no time the small harbour had been transformed into a lawless and bawdy port, known as the ‘Hell hole of the Pacific’.

With this kind of atmosphere it’s not surprising that a Russell tavern called the Duke of Marlborough obtained New Zealand’s first ever liquor licence in the 1840s. You can still see the licence hanging over the bar today!

The missionaries did their best to keep Russell respectable. Christ Church, the country’s oldest surviving church, was built in 1835, and the Marist society led by Bishop Pompallier set up their headquarters there in 1839.

After the Treaty of Waitangi was signed in 1840, Governor Hobson chose Okiato, just to the south, as New Zealand’s first capital. He renamed it Russell after Lord John Russell, Secretary of State for the colonies at the time. A year later Hobson changed his mind and made Auckland the capital. Over the years Kororareka, as Russell’s port, adopted the name in its stead.

Tensions between Māori and the British were high after the Treaty signing. To Māori, the Union Jack flying high on Flagstaff Hill (Maiki Hill) above the harbour became a symbol of their loss of self-government. From 1844-1845 it was cut down in protest four times – three times by Ngapuhi chieftain Hone Heke, and once by an ally. After the fourth provocation war broke out in Russell and around Northland; Christ Church still bears the holes where it was hit by stray bullets.

Today another flagstaff, erected by Ngapuhi as a sign of goodwill, stands on Flagstaff Hill. The town below is a peaceful haven known not only for its heritage buildings but for big game fishing, thanks to American writer Zane Grey, who in the 1920s described the Bay of Islands as ‘the Angler’s El Dorado’.

What to do in Russell

The easiest way to get to Russell is by passenger ferry – catch one from the Paihia wharf and cruise across the Bay to explore the township. If you’re visiting by car, there’s also a vehicle ferry.

The Russell mini tour is a great way to get an overview of the town’s key attractions. You can delve further into the town’s history at the Russell Museum, or wander around Christ Church and read the fascinating gravestones in the cemetery outside. Visit Pompallier House, an architecturally unique built as a printing house and tannery by the Catholic mission.

Go fishing off the wharf, enjoy a swim in Kororareka Bay or climb over the hill to Oneroa (Long Beach) or Tapeka Point. Bicycles and boats are available for hire, or charter a boat for a fishing or sailing expedition.

If you have the time and energy, seeing Russell and its surrounds on foot is a great way to go. Wander up Flagstaff Hill to see the famous flagpole, complete one of Russell’s several heritage trails or do the Coastal Walk from Russell to Okiato. Find out more about Bay of Islands walks and hikes.

When it comes to dining, the waterfront offers a great range of options, including the infamous Duke of Marlborough and The Gables – both historic buildings serving up fine dining experiences.

Staff tip: You can’t beat taking the ferry to Russell for fish and chips on the beach of an evening – Ryan, Projects Manager

Where to stay in Russell

Russell's quiet charm and historic buildings make it a delightful place to stay in the Bay of Islands. From luxury lodges and hotels to B&Bs and campgrounds, there's accommodation in Russell for every budget.