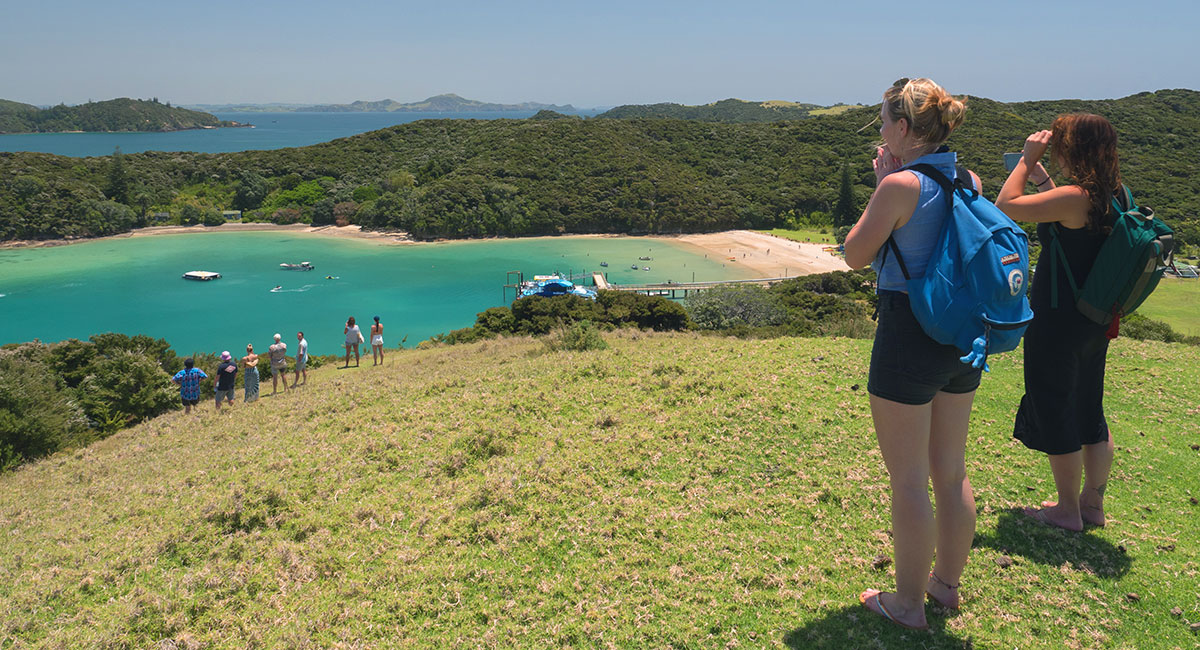 Urupukapuka is the largest of the islands in the Bay of Islands, spanning a total of 520 acres. A designated recreational reserve, the island includes a coastline of 13.5km with a number of untouched sandy beaches which make it a popular destination for day trips and longer stays.

Urupukapuka also boasts a rich archaeological landscape, with 66 significant sites including eight Māori pā (fortified villages), gardens and food storage pits.  Walking trails criss-cross the island and take in these sites, with the longest walk totalling five hours. However, even a short walk up the hill from the main landing point at Otehei Bay is enough to take in the beautiful scenery, with panoramic views across the entire Bay of Islands.

Because of Urupukapuka's rich heritage and the strong connection to tangata whenua (the people of the land), Māori place a high cultural significance on the island and maintain a close relationship with it. Urupukapuka Island was first occupied by the people of Ngare Raumati, an ancestral Bay of Islands tribe. The many sandy beaches with easy access to headlands and room for gardening provided them an excellent place to live.

In the early 19th century, a rival tribe, Ngāpuhi, took over the island. Later in the 1800s, two European families leased some land for grazing and began to clear the island's native forest and convert it into farmland.

In 1926 the famous American author Zane Grey visited the Bay of Islands on a game-fishing holiday and used Otehei Bay on the island as his base. In subsequent years he returned and a game-fishing camp was built there in his name, attracting wealthy visitors from around the world. The Crown acquired the island in 1970, and established it as a Recreation Reserve in 1979.

Thanks to hard work by the Department of Conservation and Project Island Song, Urupukapuka is now a pest-free island, making it an ideal home for endangered bird species including tīeke (North Island saddleback) and pāteke (brown teal). A spectacular pōhutukawa forest occupies the coastal fringe, while shore birds like the New Zealand dotterel, oystercatcher, pied stilt and paradise duck all breed on the island.

What to do on Urupukapuka

Urupukapuka is a paradise for those wanting to get back to nature. Visitors to this wildlife-friendly haven can explore to their hearts' content: walk, picnic, swim and snorkel, or even pitch a tent and stay overnight. There are many sandy beaches throughout Urupukapuka and the waters around the island are clear allowing for particularly good diving, especially on the east coast where there is plentiful reef life. A cafe at Otehei Bay is open at certain times of year.

Read more about walks in the Bay of Islands

Fullers GreatSights offers cruises to Urupukapuka year-round. Both our Hole in the Rock and Cream Trip cruises stop over at Otehei Bay, offering the chance to enjoy the calm, sandy beach, or wander to the top of the hill for stunning views across the Bay of Islands. On the morning Hole in the Rock cruise you can choose a free island extension - stay and explore the island, then return on the afternoon cruise at no extra cost.