Discover the place that shaped our nation with a visit to the Waitangi Treaty Grounds. 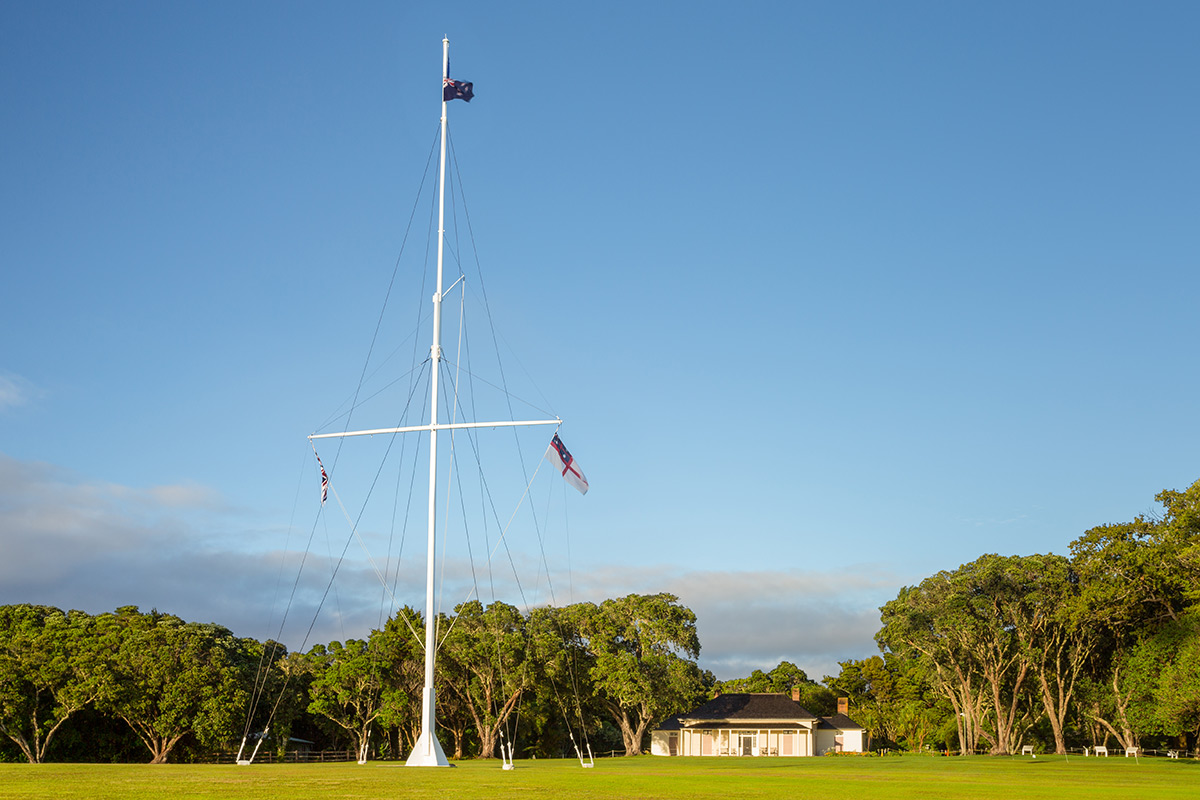 Waitangi is just 1.8km (just over a mile) north of Paihia, where the Waitangi River meets the sea. The name Waitangi means ‘weeping (or noisy) waters’ in Māori. This seaside spot is New Zealand’s most important historical site: on these stunning, park-like grounds overlooking the Bay of Islands, the historic Treaty of Waitangi was signed in 1840.

The Treaty is generally considered the founding document of New Zealand as a nation, and a symbol of the coming together of two diverse cultures – Māori and Pākehā.

In 1833 James Busby was sent to Paihia in the post of British Resident, in response to a request from Māori to the King of England for protection. Many rangatira (chieftains) were worried about rumours the French were planning to declare sovereignty over New Zealand. They were also unhappy with the bad behaviour of some British settlers.

Busby drafted the Declaration of the Independence of New Zealand, which he and many northern Māori chiefs signed at Waitangi on 28 October 1835. By 1839, 52 chiefs had signed the declaration, but the Colonial Office in Britain were not happy. They decided a new agreement between Māori and British subjects was needed.

Captain William Hobson was appointed Lieutenant Governor of New Zealand and charged with formally establishing it as a British colony. He and Busby wrote the Treaty document together and had it hastily translated into Māori.

The Treaty of Waitangi was formally signed outside Busby’s house at Waitangi on February 6, 1840 by representatives of the British Crown, and Māori tribal leaders. Copies of the Treaty were then taken around the country to be signed by Māori chiefs who could not make the journey. Not all chiefs chose to sign the Treaty, and to this day controversy over its interpretation and execution is a significant topic for New Zealanders.

In 1932 the Governor General, Lord Bledisloe, gifted the Waitangi Treaty House and grounds to the nation as a national historic site. Over the years the house and grounds were restored and developed. A whare rūnanga (meeting house) representing all tribes was added, and presented to the people of New Zealand on the centenary of the Treaty’s signing in 1940.

The date of 6 February was first commemorated as a national holiday in 1974. Since then, Waitangi Day is celebrated annually with a public holiday and a moving and often spirited bi-cultural ceremony at Waitangi.

What to do in Waitangi

A visit to the Waitangi Treaty Grounds is the best way to gain an understanding of Māori culture and the beginning of New Zealand as we know it today. Wander the grounds, view the beautifully carved Te Whare Runanga, and see Ngatokimatawhaorua, one of the world’s largest Māori ceremonial war canoes.

Te Kōngahu Museum of Waitangi is a new and award-winning museum with interactive exhibits about the Treaty and our national’s history. Entry to Te Kōngahu is included in your admission.

Guided tours and cultural performances take place regularly throughout the day. Take part in the spine-tingling challenge from fearsome Māori warriors, followed by waiata (singing), poi dancing, and the famous haka. There is a cafe on site, and in the evenings you can experience an authentic Māori hangi dinner, cooked under the earth.

Visiting the Waitangi Treaty Grounds is free for New Zealanders, while a charge applies for overseas visitors.

Close by the Treaty Grounds you’ll find the Waitangi Golf Course, which has very reasonable green fees for one of the most stunningly scenic golf courses in New Zealand. The Waitangi Mountain Bike Park is close by (off Bayly Rd) if you’re feeling adventurous.

If you're visiting Waitangi at Waitangi Day, you'll need to make sure your accommodation is booked well in advance! Waitangi Day commemorations take place on the Treaty Grounds and at the nearby Te Tii marae, with a dawn service, speeches, formal ceremonies and a 21-gun salute. Fleets of waka (Māori canoes) can be seen out on the water, including Ngatokimatawhaorua, New Zealand's largest ceremonial waka.

Staff tip: Make sure you visit Waitangi – it’s the most important thing to do, especially if you have Māori blood – Tangiwai, crew member

Where to stay in Waitangi

Waitangi is just a short distance from Paihia but there are also accommodation options closer to the Treaty Grounds.