There are nine different species of dolphin found around New Zealand’s coast. In the Bay of Islands you’ll most likely see bottlenose dolphins, common dolphins and occasionally orcas.

Dolphins are mammals, not fish, and are warm-blooded. They have a bony skeleton and they breathe air through their blowhole. Their bones are much spongier than land animals and their skin is ten times thicker than human skin, thanks to a thick layer of fat called blubber. The outer layer of skin is constantly replaced (as often as every two hours!) to remove algae and bacteria and help them swim faster.

Dolphins live and travel in groups called pods. They are clever hunters and only few animals dare attack them. They sometimes hunt alone but are more successful when they hunt together. Pods swim around schools of fish forcing them into a tight ball, then they take turns snapping the fish up. Living in pods also means the dolphins can help each other find food and watch for predators. Female dolphins help each other raise babies, and if a dolphin is injured, the pod will protect them.

Dolphins communicate with each other using clicks, squeaks and whistle-like sounds; their sounds are among the loudest animal noises in the ocean. They also like to touch each other just like humans, giving handshakes and hugs.

Keep an eye out for bottlenose dolphins, common dolphins and orca on your Bay of Islands cruise:

Bottlenose dolphins are larger than common dolphins, with a relatively short beak and a hooked, prominent dorsal fin. They have dark or light grey backs, with paler underbellies. They live in pods of up to 60.

When they’re feeding close to the shore, bottlenose dolphins mostly eat bottom-dwelling fish and invertebrates. They will dive for around 3-4 minutes while they’re inshore but might dive for much longer periods offshore.

Male bottlenose dolphins can live as long as 40-45 years, while females can live up to more than 50 years of age. 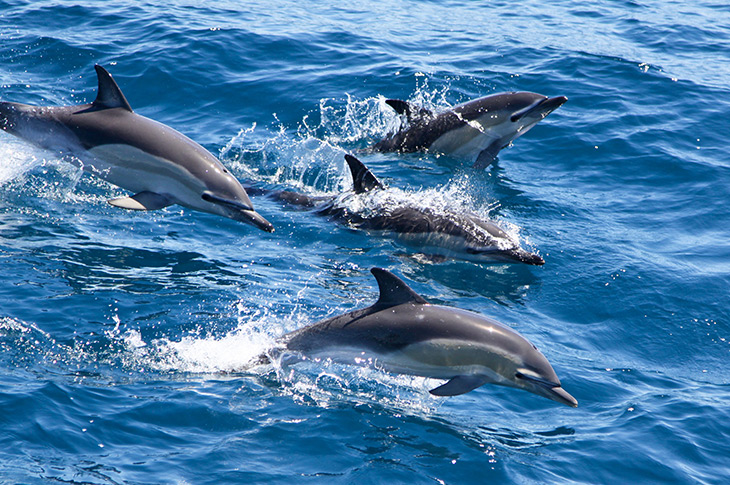 You can easily recognise common dolphins by their tall dorsal fin and pale side patches. They form large pods, sometimes including up to several thousand individuals. They'll also sometimes hang out with schools of pilot whales and other dolphin species. Common dolphins are abundant in the Bay of Islands, but we don't have a precise population estimate.

Common dolphins feed on a variety of prey including surface schooling fish, small mid-water fish and squid, often hunting together in schools. They can dive to depths of up to 280 metres in search of prey. They can dive for up to 8 minutes, but usually, spend between 10 seconds and 2 minutes underwater at a time.